Keiji Haino - The Meaning of Blackness

Quick announcement, this might be my last review for a week or so, since I am moving soon, and will be busy packing and moving and all that good stuff. Anyway, review time. 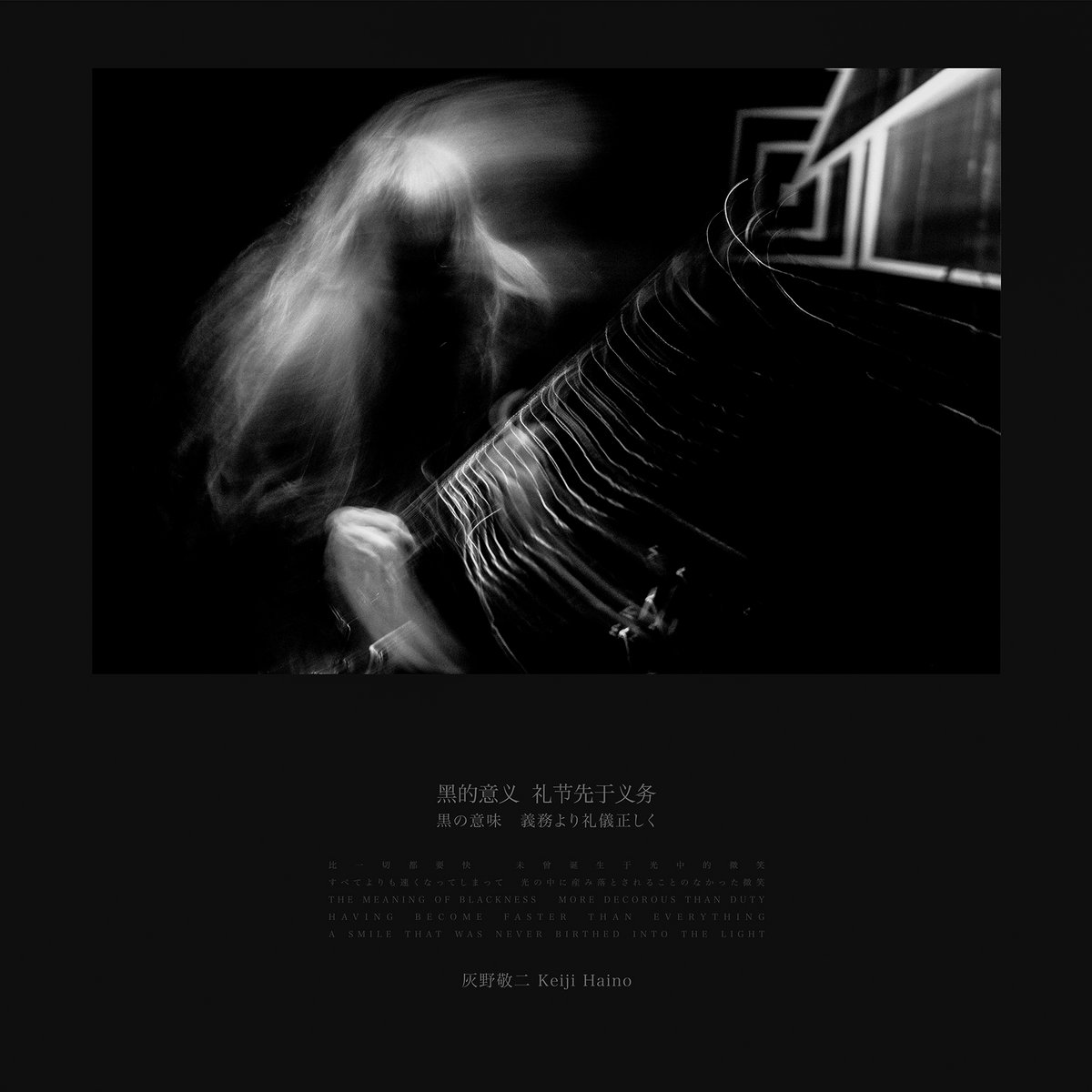 Keiji Haino is a monolith in the Japanese noise and free improv scenes. He was the frontman, guitarist, and vocalist of noise rock band Fushitsusha, which were most active in the 90s and 00s. He's also released an unreasonably huge amount of solo albums in addition to Fushitsusha's already large discography. He's had numerous collaborations with the likes of Merzbow, Balasz Pandi, SUMAC, Jim O'Rourke, Peter Brotzmann, Oren Ambarchi, Tatsuya Yoshida, and the list goes on and on. Needless to say, he's one of the most important figures in this music scene, and I've heard several of his albums, both with Fushitsusha, and solo. He's released five live albums alone this year, but this is the only one of them I've heard. Needless to say, as a fan of Haino, I was interested in seeing what he sounds like these days, as I've only listened to his older stuff mostly. How does this modern, completely solo live recording from 2016 fare against his previous work?

Let's talk about the setup of this live performance first. It's a nearly 90 minute performance split into two parts, where Haino plays guitar, sings (sometimes more like shouts), and fiddles with electronics, including drum machines, and a synth I think. This album is heavily improvised, and very experimental. The album starts with a ghostly vocal performance, before he begins shouting in English, with such an intimidating and terrifying vocal timbre, that it really shakes you to your core. Then there's a drum machine freakout, where the drums gradually become more and more distorted, as Haino begins to layer his apocalyptic noisy guitar over it.

It's at this point I feel I should mention I consider Haino to be one of the greatest guitar players of all time, certainly the best noise guitarist out there for my money. The way he just constructs walls of feedback, while maintaining gloomy melodies that sound like the world is ending, or already has, is simply mindblowing. But he has a softer, more melancholy side as well. After the drum machines end, Haino solos for a while, then suddenly, the music abruptly cuts to a performance of my favorite Haino song, Koko, which translates to "Here." My favorite performance of Koko is off of his 2003 live album which is named after the track. That performance is more ambient, and almost post rocky, while this grows into something more aggressive. But it never sheds its melancholy beauty despite the growing swells of guitar noise. It simultaneously hurts and heals the soul, in this beautiful catharsis. There's a peace among this ocean of noise, and it may not be apparent at first, but repeated listens make it clear. For a more accessible version though, with a beautiful climax, I'd highly recommend the version I mentioned earlier from 2003. It's my second favorite Haino release.

Part one ends with more guitar noise and electronics noise after Haino concludes his gorgeous rendition of Koko. Part two I'm admittedly less familiar with, as I've only heard it twice, compared to the three times I've heard the excellent part one. The second part is the longer of the two parts. It opens with a droning synth noise, like the solar wind endlessly and unchangingly assaulting the earth after some calamity has annihilated its magnetic field. This is the soundtrack of the apocalypse to be sure. The doom apparent in the deep, textured, droning noises is unmistakable. I feel I should mention that the fact that this entire album is made by Keiji Haino and no one else, and even more so that it was a live performance, is stunning. That one man can make all this rich and complex, yet dark and nihilistic noise in real time blows my mind every time I listen to this album.

After eleven minutes of slowly shifting and pulsating noise, Haino finally comes back in with his vocals. Haino is an incredible vocalist, whether he's using his beautiful ethereal singing voice, speaking deadpan, or shouting until your eardrums implode, his vocal delivery is always incredibly unique and compelling. I feel the most notable example of this on this album is in the albums last 15 minutes, where he truly goes all out, with the most terrifying vocal performance from him I've ever heard. I've heard a lot of music, and very few vocalists comes close to instilling this level of pure and genuine fear for your life. It puts me directly into fight or flight mode.

Overall, I think if I had to pick any one Haino record to take onto a desert island, this would have to be it. 2003's Koko is close, but the sheer level of variety on display, plus the incredible vocal nightmare he goes into in the album's closing minutes, make it my favorite record from Haino, both solo and with Fushitsusha. While I feel Part two might perhaps be a touch too long, its ending climax is sheer brilliance, and is worth the wait. I can't find any other real faults with this album, and this is definitely one of my favorite releases this year. 9/10.

P.S. Speaking of favorite releases this year, I'll be doing a year end list of my top 25 favorite albums from this year, once I get moved into the new house and properly settled. It might take a week or two, but I'll have it done by the end of the year, so look forward to that. I've already spoiled a few of my top albums with these reviews, but it's up to you to guess where they'll place on the list. Finally, thanks for reading, this is my longest review so far I think, by a fair bit, and it took some time to write. But I think it's my favorite review I've written so far, so I hope you enjoyed reading it. I certainly enjoyed writing it, and listening to the album.