Before I start on this review, I wanted to apologize for the delay since the last review. I was incredibly busy moving and thus didn't have tons of time to listen to new music. But now I'm largely moved in, and all is well, so music listening can resume. With regards to the year end list, I set a goal for myself of listening to 100 albums from this year before I make the list, and I'm nearly done with that. So the list should be up soon. To accompany the list as well, I will be doing a stream on Saturday, January 2nd where I listen to a song from each album, and discuss the music with the viewers. If this sounds interesting, follow me at https://www.twitch.tv/communistorc. More details, such as the time the stream will happen, will be posted once the list itself is published. Anyway, review time. 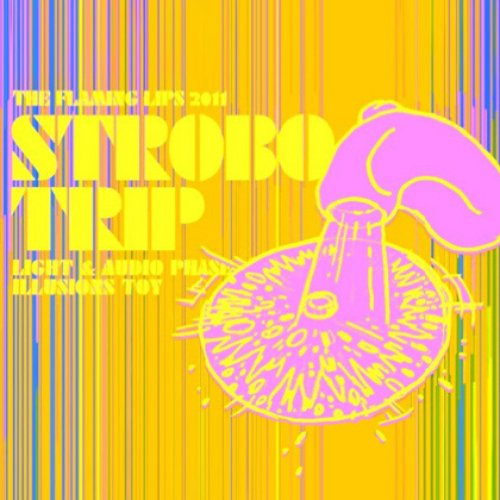 First off, this is a special review for me. This review celebrates my 1000th rating on RYM! I wanted to do something special for 1000, so I picked Strobo Trip, an EP by the Flaming Lips. Why this? Well two reasons. First, it's a huge EP, over six hours long. So I figure it should be a fittingly large undertaking for a large number. The other reason I picked this is because I've already heard the first hour of the six hour song, and I really enjoyed it. So naturally, in terms of long releases that I knew I would enjoy and not waste several hours of my time on, this was the obvious choice.

Strobo Trip is made of three tracks: the opener, Butterfly, How Long It Takes to Die, which is 6 minutes; the closer, Evil Minds, which is 4 minutes; and the bulk of the EP, Found a Star on the Ground, which is a whopping 6 hours. This isn't the longest release I've ever listened to: that would be Daughter of Darkness by Natural Snow Buildings, which is an unreal 7.5 hours (and quite excellent). However, Found a Star on the Ground is, by far, the longest song I've ever listened to. Nothing really even comes close. Is it actually good though? That is to say, how well does it justify its 6 hour length?

Shockingly well, is the answer. For a 6 hour song, this is very thematically cohesive without getting boring. The lyrics consist of the phrase "I found a star on the ground." Nothing else, barring some short sections where a list of names of people who've supported the band are read off. The name reading is probably the weakest part of the album, but it's ultimately a small fraction of the runtime so it's not a huge deal. The fact that the lyrics never change make each section thematically consistent, despite being sonically different.

This song is split up into over a dozen different sections, the longest being around an hour long. The variation this song covers is intense, from krautrock grooves, to some of the best jams I've ever heard, to intense noise rock, to gorgeous ambient bits. Yet, for the most part, the song retains a similar feel, with its incredibly fun and rhythmic drum grooves. Even more surprisingly, this song simply does not get boring. Each section is thematically consistent enough with each other to feel like it makes sense to be in the same song with each other, but different enough to remain interesting. This is an incredibly impressive balancing act, especially considering the length of the song. The fact that it never gets boring, even after 6 hours is incredible really

But just being not boring isn't enough. Is it actually good? Let me put it this way. I used to love jam bands. I saw Widespread Panic and Gov't Mule in concert while I was a teenager. As far as extended jams go, this song does it better than anyone else, with the possible exception of CAN's live performances. The solos are incredibly compelling, the grooves are hypnotic, the subtle changes that morph the sonic landscape drastically over time are simply fascinating. Special mention to the occasional use of noise in the song too, that's sick.

So where does this leave us? Is the 6 hour song worth it? I'd say so, if you like psychedelic music, rock, noise, etc. Do I think it needs to be 6 hours? Probably not, and it might benefit from being shorter. There were a few sections where i was a bit tired from listening to it for an extended period of time, even though I was taking occasional breaks and listened to this in three sittings. However, it's still a stunning song, and the fact that it's so damn good for so damn long is incredibly impressive. Plus that ending is truly transcendental. I apologize if this review was a bit messy, it's hard to review a 6 hour ep if I'm honest. Anyway, if you have the patience, and like this sort of music, this is essential I feel. 9/10.

Oh right there's two other songs. They're pretty good too I guess.